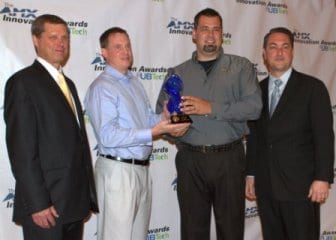 AMX® will provide business school with $50,000 worth of new technology

The successful implementation of technology to connect and integrate the Wake Forest University Schools of Business campuses in Charlotte and Winston-Salem garnered the attention of AMX®, a leading provider of hardware and software solutions.

“We are very excited to receive the award of $50,000 worth of AMX® products. This will provide students and faculty with access to state-of-the-art technology that is essential for advancing education in a global economy. The gift is very timely as it will be used to implement the core audio-visual foundation in several of the new classrooms in Farrell Hall, the new Schools of Business building that is set to open in the fall of 2013 on our main campus in Winston-Salem,” said John Owen, Director of Information Technology, Wake Forest University Schools of Business.

“To attract new students and keep up with competing schools, universities are adapting their facilities to current trends in the learning environment,” said Jackie DeLuna, Director of the Global Education Alliance and AMX Education Marketing. “The universities recognized are answering those challenges with ground-breaking uses of technology.”

AMX® technology is already being utilized at the Wake Forest University Charlotte Center that opened in January of this year. Rashid Skaf, President and CEO of AMX® personally delivered the company’s first Enova® DVX-3150HD All-In-One Presentation Switcher to the Charlotte campus prior to its grand opening. The switcher integrates audio visual equipment and information technology for control and distribution between classrooms, conference rooms, auditoriums and campuses.