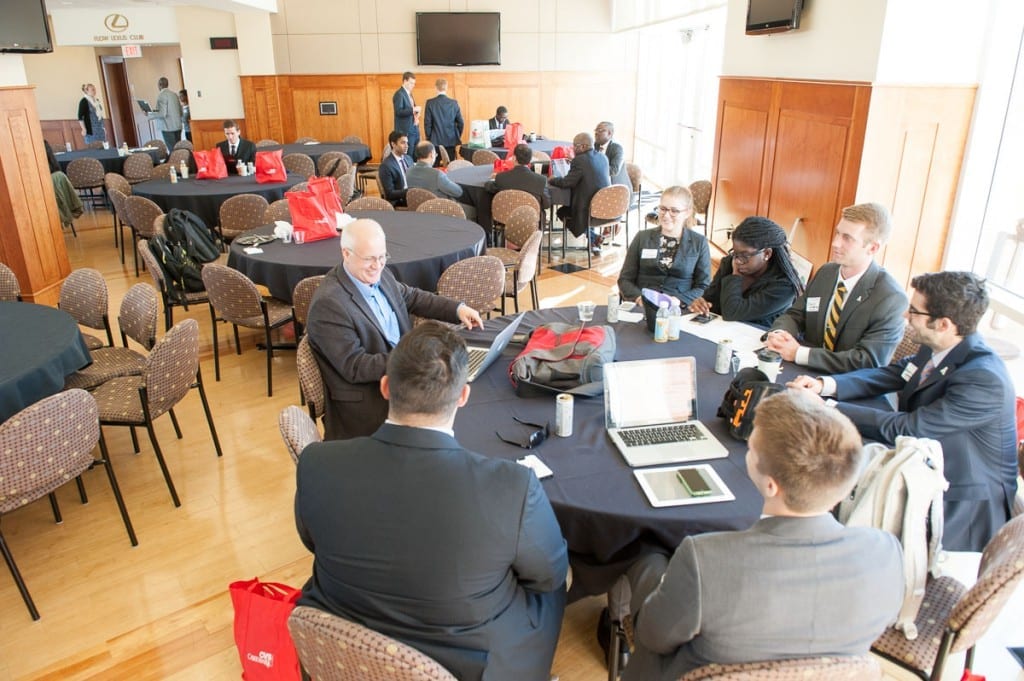 WINSTON-SALEM, N.C., — The Wake Forest University School of Business 2014 Retail and Health Innovation Challenge, held Nov. 14-15, 2014, awarded the grand prize to a team from University of Southern California’s Keck School of Medicine. The competition, hosted by the School’s Center for Retail Innovation and sponsored by CVS Health, offered a total of $41,000 in prize money.

“This year’s Retail and Health Innovation Challenge was particularly exciting. We had 16 teams from across North America competing for the most innovative idea at the intersection of retail and health,” said Roger Beahm, RockTenn executive director for the Center for Retail Innovation and professor of practice. “That amount of focus for students made the competition particularly intense.”

The teams from Wake Forest University and top universities around North America pitched their innovative ideas to impact the intersection of retail and health in Winston-Salem, N.C. The awards were announced during a ceremony Nov. 15 in Wake Forest’s Deacon Tower at BB&T Field.

Here’s how the Challenge worked: Each team delivered a two-minute pitch to a panel of judges, comprised of executives from CVS Health, Bellomy Research, Inmar, ITT Industries, Lowes Foods, National Confectioners Association, PepsiCo, RockTenn, Sales Factory + Woodbine, and Truliant FCU. What makes this competition unique is that teams truly give an “elevator pitch” – with no fancy AV support or presentation decks.  But teams could use props, prototypes, print materials, phones or laptops to support their ideas during their two-minute opportunity.

“The teams competing this year went beyond business schools. We broadened applications to universities with great medical, design or public policy programs. That brought us some new thinking in terms of innovation, rather than better implementation of existing ideas or technology in the marketplace,” said Brett Montgomery, one of the student co-chairs. “That really made this year’s Challenge exciting and different.”

Earlier this year, CVS Health became the event’s lead sponsor with a five-year commitment through 2018, which has helped the Challenge focus on ideas at the intersection of retail and health.

“CVS Health is sponsoring the Retail and Health Innovation Challenge because as a pharmacy innovation company, we recognize that the power of new ideas can lead to opportunities to touch many more lives,” said Deepak Masand, CVS Health vice-president of marketing and customer insights. “We heard many wonderful ideas during this year’s Challenge and I am encouraged by the quality of tomorrow’s retail and health leaders.”

The Q-Cigarettes, LLC team took home the $25,000 grand prize. Drew Park, a fourth-year medical student at the University of Iowa Carver College of Medicine and a first-year master’s student at USC’s Keck School of Medicine travelled solo to pitch his company’s product to the judges. Q-cigarettes’ product is a novel tobacco dependence treatment.

Senior design students Sean Smith and Zach Starin from Appalachian State University received second place and $10,000 for their idea. MyO’bility is a rehabilitation kinetic brace that aids the user in the extension and flexion of their leg. Third place and $5,000 went to the Foldable Foodware team, also from Appalachian State University. The team promoted environmentally conscious food storage that accommodates many different food types.

In addition to the prizes awarded to the Challenge winners, an additional $1,000 prize was awarded to the “Fan Favorite” team, the University of Arizona, at the gala. Votes cast for teams opened the evening of Friday, Nov. 14, and ran through 5 p.m. on Saturday, Nov. 15.  This year international traffic from more than 16 countries resulted in more than 34,000 website hits during the 24 hours of the competition.

This two-day competition held each fall selects teams from top business programs in the nation through their submission of innovative business plans.

The Challenge is organized and produced by Wake Forest University School of Business student volunteers led by co-chairs Genevieve Holland (MBA ’15), Brett Montgomery, (MBA ’15), and Nick Tankersley (MBA ’15). The faculty advisors are Roger Beahm, RockTenn executive director of the WFU Center for Retail Innovation and professor of practice in marketing, and Stan Mandel, director of the Angell Center for Entrepreneurship and professor of practice in entrepreneurship.