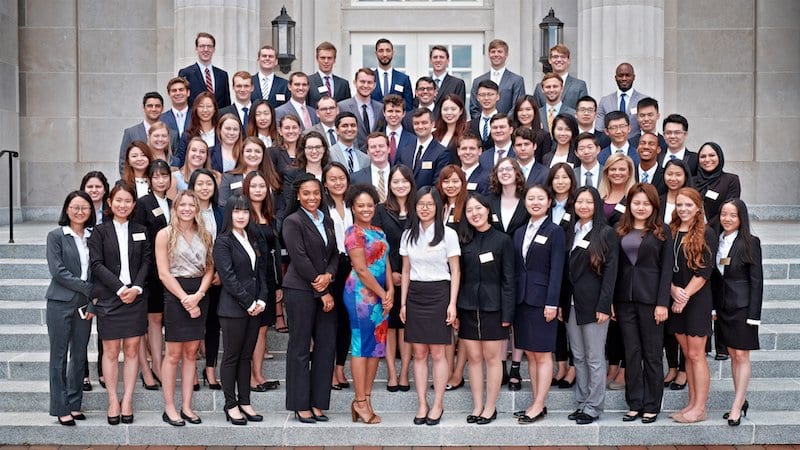 The School of Business welcomed a new class of students for the Master of Science in Business Analytics program, nearly double the size of the first cohort which graduated in May. The 67 students who began orientation on July 10 represent 46 undergraduate universities and 17 undergraduate majors.

“I’m excited about meeting people from all over the world,” said Lauren Formica (’16, MSBA ’18). “The diverse student population is one of the things that attracted me to the program. We have folks from China, from Belgium, from all over the United States and down the road in Greensboro and High Point. We’re all meeting people with a variety of backgrounds and experiences which is fantastic.”


During the two-day orientation, students met with faculty members, career coaches, and campus resource specialists to learn more about the program and get acclimated. One session, led by recent MSBA graduates Jim Clark, Crystal Dai, Denise Dubick, Jane Hardy, Yusi Lao, and Grant Trivette, offered the new students perspective on the program and advice on their career searches.

“The students who come for the MSBA degree know we are a relatively new program and they want to talk to the alumni about what it was like to go through the program day to day,” MSBA Program Associate Dean Jeff Camm said. “They also wanted to talk with them about how to time and be more effective in their job search.”

That career preparation begins immediately. As part of the orientation, students attended a reception hosted by Inmar. “As one of our corporate partners, Inmar has been so supportive of our program,” Camm said. “Members of Inmar’s analytics team were present, allowing our students to start networking right out of the gate.”

The field’s career prospects appealed to many of the MSBA students, including Formica, who is one of 15 “Double Deacs” in the program.

“Analytics is obviously an up and coming field, and we’ve seen so many reports about how there’s going to be a supply and demand gap in the analytics industry and the number of folks who are going to be needed to fill that gap,” she said.  “While it’s clear we need more analytics professionals; there’s something unique about Wake Forest’s emphasis on being able to communicate those insights and so that’s why business analytics appeals to me.”