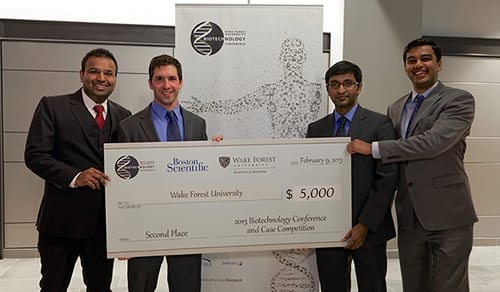 WINSTON-SALEM, NC – The Wake Forest University Biotechnology Conference and Case Competition celebrates its fifth anniversary this year. The event draws competitive teams from the nation’s top schools – bringing the best and brightest minds together to solve a real issue in the biotechnology industry. For the second year, Boston Scientific serves as lead sponsor for the event March 21-22 at the Wake Forest University School of Business and Biotech Place.

Biotech and healthcare professionals, firms, students, faculty and community leaders collaborate and share insights on the future of biotechnology. In addition to speakers and networking events, the sponsored case competition unites MBAs and students from other disciplines to solve a strategic challenge, with a chance to earn a grand prize of $10,000.

“Each team is required to have an MBA student participate,” said Jo-Zette Dick, a second-year MBA student and one of the conference organizers. “We also see engineers, medical/science, and liberal arts students entering the competition to help find creative solutions for the biotech space.”

The conference organizers from the School include Jo-Zette Dick, second-year MBAs Paul Chen and Dana Upton, and Ph.D./MBA Dipen Vyas, with faculty advisor Len B. Preslar, Jr., adjunct professor, who also serves as the executive director of the Biotechnology Conference. Rounding out the organizers is Deepika Poranki, a commercialization associate at Wake Forest Innovations.

Boston Scientific’s Michael P. Phalen, the executive vice president and president of medical surgery will present the keynote and panel discussion beginning at 4:30pm on Friday, March 21 in Broyhill Auditorium in Farrell Hall, the School of Business’ new home. The event is open to the public, and the media is invited to attend.

After the keynote and panel discussion, the teams will receive the case from Boston Scientific and work on their presentations throughout the night, presenting them to judges the next morning beginning at 9 a.m. Winners will be announced at an awards banquet in Biotech place Saturday March 22 at 7 p.m.