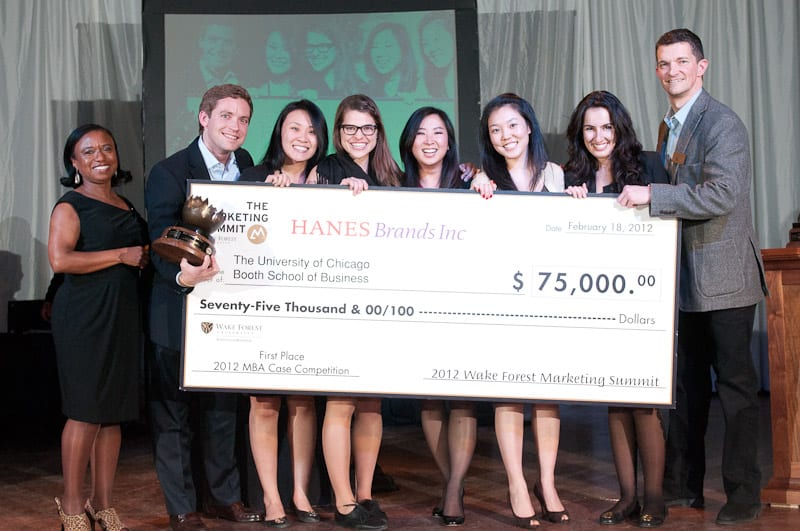 WINSTON-SALEM, NC— A team of MBA students from the University of Chicago Booth School of Business walked away with a $75,000 cash prize and the Cheerwine Cup on Saturday, Feb. 18, after winning first place in an international case competition at the 22nd Annual Marketing Summit presented by the Wake Forest University Schools of Business Center for Retail Innovation.

Members of the winning MBA case team include: Christina Maria DesVaux, Sinem Guzelce, Sohee Lacey, Anna Liu and Gina Pee and Tom Batten, a 2001 graduate who earned a bachelor’s degree in chemistry from Wake Forest University and the only male on the Chicago team.

“I was so excited to be able to come back to Wake Forest and show off my undergraduate alma mater to my MBA teammates and participate in this competition,” said Batten. “Wake Forest puts on such an outstanding Marketing Summit each year. Winning the $75,000 makes the trip from Chicago even more amazing.”

University of California-Los Angeles Anderson School of Management finished second and the University of Pennsylvania Wharton School was the third place finisher in MBA case competition.

Howard Upchurch, President of Innerwear and Hosiery, Hanesbrands, Inc. said, “Hanesbrands is proud to sponsor the Wake Forest Marketing Summit MBA case competition. We are very impressed with their intelligence, energy and insights. The teams generated a number of thought-provoking ideas for our business. The WFU case competition effectively showcased the talent of the next generation of marketing leaders.”

Christina Maria DesVaux of the University of Chicago Booth School of Business received plaque and a $1,000 check for the inaugural John A. Scarritt Marketing Summit MBA MVP Award. The award was given to the one participant who showed distinction and outstanding contributions during the presentations. Upon giving the award, Scarritt, a Wake Forest MBA alumnus, said, “I am so proud to be associated with Wake Forest University Schools of Business and the world-class Marketing Summit.”

A team of students from the University of Pennsylvania Wharton School won first place in the undergraduate case presented by BB&T, taking home a $10,000 cash prize and the BB&T Lighthouse Trophy.

“We will definitely find ways to leverage the ideas we heard. We found the outcomes of this competition to be incredibly valuable,” said Howard Brooks, Executive Vice President, Electronic Delivery Channels, BB&T.

Brigham Young received a $1,000 prize for winning the Fan Favorite award, voted on by people all over the world via (marketingsummitlive.com). Nearly 9,000 votes were cast for the Fan Favorite during the 36-hour case competition.