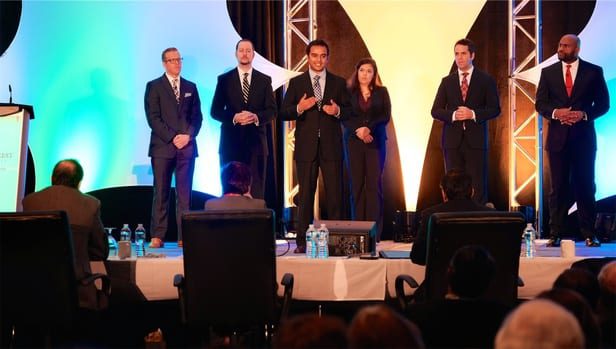 WINSTON-SALEM, N.C. – During many business case competitions, students present ideas to a panel of judges – usually just a handful of faces staring back at them. But at the Wake Forest University School of Business Marketing Analytics Summit, finalist teams from North America’s top business schools faced hundreds of reviewers experienced in marketing data analytics, along with four expert judges.  The final six teams in the graduate and undergraduate competition held April 6-8, contended for a total cash prize package of $45,000, and walked away with an experience they’ll never forget.

To celebrate the 25th anniversary of the Summit, the School’s longest-running, student-led event, the Wake Forest Center for Retail Innovation (CRI) partnered with Inmar to integrate the competition into the Inmar Analytics Forum. The three-day symposium featuring executives and thought leaders from multiple industries offered their insights on the impact of “Big Data” on all functional areas of a business.

“This is the power of collaboration in practice,” said Charles Iacovou, Dean of the School of Business. “The integration of the Marketing Analytics Summit and the Inmar Analytics Forum created something together that is more spectacular and impactful than separate events.” He told the students in attendance that he hoped they would always remember this experience as they moved into their professional lives.

This year’s Forum attracted more than 600 professionals and set a new attendance record.

“Hosting this prestigious competition and its related events helps the Center fulfill its purpose of being the premier resource for faculty- and student-led academic and practitioner-oriented research that shapes the future of retail. It’s a new pinnacle for the Summit on this milestone anniversary” said Roger Beahm, RockTenn executive director of the Center for Retail Innovation and professor of practice in marketing at the School of Business. “This event exposes students from across the globe to a new level of marketing data analysis, critical thinking, professional presentation and networking. At Wake Forest, we’re educating a new generation of marketing professionals who analyze data, extract insights and create actionable strategies.”

The eight graduate and six undergraduate student teams chosen from dozens of applications had just one week to analyze real-world data sets and solve a business case that challenged them to leverage mobile technology for shoppers’ in-store experiences. Three undergraduate and MBA teams were chosen to present their solutions to a panel of judges and the 600 or so executives attending. The audience voted by text for their favorite presentation, serving as the “fifth judge” during the competition’s final rounds.

“These exceptional students represent the future of our businesses,” says Inmar Chairman and CEO David Mounts. “The type of innovative thinking and fresh perspectives demonstrated in their presentations will be what enables us to capitalize on all that analytics can mean for society. We have only begun to scratch the surface.”

At an evening gala held April 8 in Winston-Salem, N.C., the winners of the MBA division were announced. First place and a $20,000 cash prize went to the Northwestern University Kellogg School of Management team: Alex Bourdeau, Adam Hirschkatz, Yajor Kapoor, Marissa McGann and Nick McGann. Second place and $5,000, was awarded to the team from Yale School of Management. The Wake Forest University School of Business MBA team earned third place and a prize of $3,000.

“What sets this competition apart is the chance to receive feedback from hundreds of industry leaders,” said Tom Blue (MBA ’15), one of the Summit’s student co-chairs. “Networking with these industry leaders and gaining this level of professional exposure is an incredible opportunity that most case competitions don’t provide.” Co-chairs Laura Bondel (MBA ’15) and Nicholas Tankersley (MBA ’15) also led the event with dozens of volunteers from the School’s MBA and Master of Arts in Management programs, which gave the team invaluable experience in working with a major business partner and running a major event.

The undergraduate division final round was held April 7, with winners announced the same day.  The University of Maryland Robert H. Smith School of Business team of Jack Rupple, Ashley Jager, Michael Barnett and Bridget McManus took home first place and $8,000. The second place team from Yale School of Management was awarded a $3,000 cash prize. The third place team from The Wharton School at the University of Pennsylvania received $2,000. University of Maryland student Ashley Jager earned the undergraduate MVP award of $1,000, presented by the N.C. Retail Merchants Association.

Marketingsummitlive.com with photo galleries, blog posts and more from the competition saw 91,000 web hits from 82 counties. Nearly half the traffic came from mobile devices, which is an increase over past years. In social media, the competition’s weekly reach on Facebook increased more than 80 percent over 2014 and the number of tweets increased more than 110 percent. The website also allowed online voting for Fan Favorite – the school with the most virtual support during the competition.