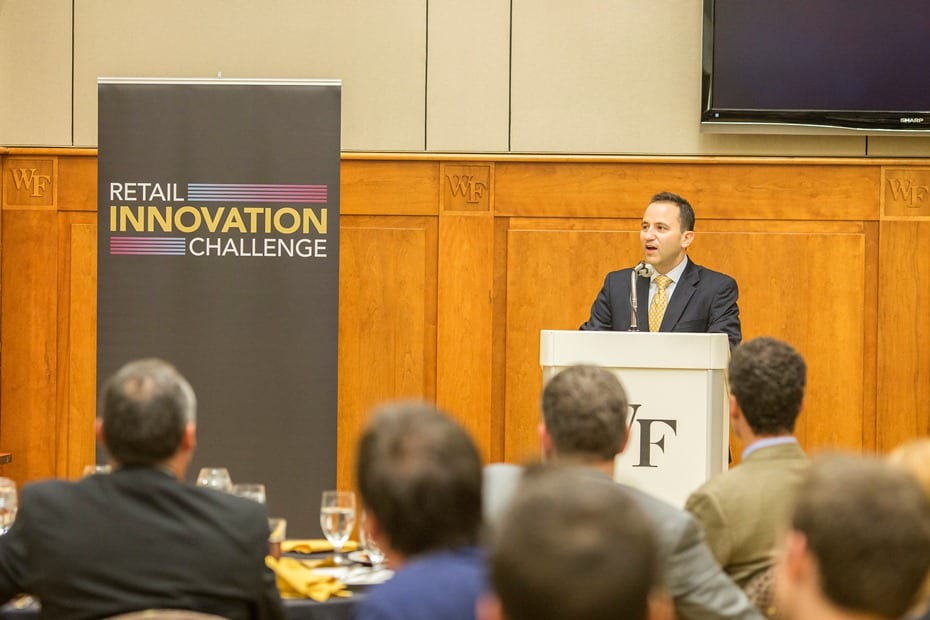 (Winston-Salem, N.C.) It’s been called the “silver tsunami” – a shift in demographics that is beginning to crest in the U.S. as Baby Boomers reach their retirement years. How retailers can ride that wave of change is the focus of the 2nd Annual Wake Forest Retail Innovation Challenge, held at the Wake Forest University School of Business Nov. 14-15.

The 2013 Retail Innovation Challenge is hosted by the Wake Forest University School of Business Center for Retail Innovation, and sponsored by CVS Caremark. It features 21 student teams from schools such as Harvard Business School, Vanderbilt’s Own Graduate School of Management and Arizona State University representing some of the best MBA and undergraduate programs in the nation, vying for a top prize of $25,000. Second place will receive $10,000 and third place will take home $5,000.

One team will be declared the “fan favorite” from votes received.  “We will be posting videos and photos of the 21 teams in action,” said Blake Armstrong (MBA ’14) and one of the program co-chairs. “We want schools and the general public to watch them and vote for their favorite team.”

Here’s how the Retail Innovation Challenge works. Each team will deliver two separate two-minute pitches during the event to be held in Wake Forest’s Deacon Tower at BB&T Field. The premise: teams have bumped into an influential executive at a sporting event and have two minutes to impress him or her with their business pitch. The competition is on Friday, Nov. 15 beginning at 8 a.m. The teams with the best five innovation ideas are then invited to the Wake Forest School of Business, Farrell Hall, which will serve as the boardroom for a 30-minute formal presentation to a panel of judges. The top three ideas win the cash prizes.

But the event is more than a competition, it is an opportunity for those participating to learn from experts in the field about the graying of America, and how that will affect retailers and marketers.  CVS Caremark’s President and CEO Larry Merlo will present a keynote address on “Reinventing Pharmacy for Better Health” beginning at 7:30pm on Thursday, Nov. 14 on the Wake Forest Campus in the Broyhill Auditorium in Farrell Hall that is also open to the public and the community is invited to attend.

Sponsors include: CVS Caremark, The Pantry, RockTenn, The Fresh Market and Truliant.

The event is organized and produced by student volunteers led by co-chairs Blake Armstrong (MBA ’14), Alex Alleman (MBA ’14) and Naomi Freeman (MBA ’14). The faculty advisors are Roger Beahm, executive director of the WFU Center for Retail Innovation and Stan Mandel, Professor of practice at the School and director of the Angell Center for Entrepreneurship.