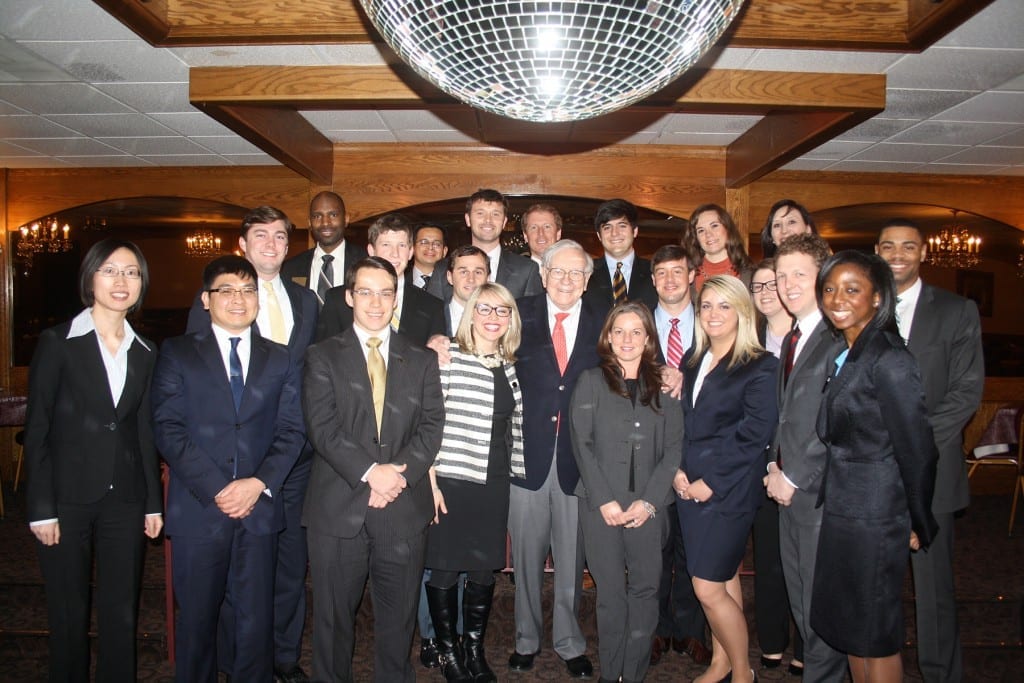 Wake Forest students prepare for the opportunity of a lifetime

Imagine you’re a minute late for a Q&A session with a major CEO, because your driver had the wrong address. As you wait anxiously in the lobby, the elevator doors open.

“Warren Buffett stepped out and said ‘Wake Forest? Let’s go!’” said Janey Kuyath, who is studying for her Master of Science in Accountancy degree. “He got on the elevator with a group of us and we all rode up together.  I do not think any of us could believe that had just happened! Then, once we got to the room upstairs, Wake Forest was seated in the front section!”

Buffett routinely invites students from top business schools to visit him in Omaha, Nebraska at Berkshire Hathaway.  He is its chairman, president and CEO and has been at the company’s helm for more than 50 years. According to TIME magazine, Berkshire Hathaway saw record profits in 2013 of $19.5 billion. If you are interested in business, his is THE brain to pick. Each of the eight schools has the chance to ask one or two questions. As you can imagine, they’re not softballs.

To get to this Q&A session, 20 Wake Forest School of Business students and faculty advisor Ya Wen Yang, assistant professor of accounting, spent more than a month preparing. They read “The Snowball: Warren Buffett and the Business of Life” by Alice Schroeder, all 832 pages. Since the students hailed from various graduate programs at the School of Business, they held book discussion groups in the evenings, virtually connecting the Reynolda and Charlotte campuses by videoconference to extract ideas from each chapter. Many students also researched news articles and other information about one of the most successful investors in history.

But it wasn’t all book clubs, assignments and outside reading. There was a little friendly competition too. “Each student submitted questions they would like to ask Mr. Buffett,” said Yang, who accompanied the students to Omaha. “We put up all the questions and students voted on the top two questions. The students who wrote them would be delegated to ask them at the Q&A session.”

For Dhaval Shah, a second year MBA in the Charlotte Saturday program, that meant posing one of the Wake Forest questions. “If you were to be appointed the chairman of the Federal Reserve today, what would be your short-term and long-term policy goals?”

Shah said in answer Buffet joked that he would love to be the chairman since he would be a superhero who can decide on policies and print money. On a serious note, Shah said Buffett is pleased with what banks are doing now and that he would not make changes to the policies in the short-term and expressed confidence in current Federal Reserve Board chair Janet Yellen.  Shah said Buffet wrapped up by noting the economy has picked up pace in the last year and he remains very optimistic about the American economy and the future of this country.

“Mr. Buffett totally proved that he meets no stranger. During the Q&A session, he was open and frank, willingly shared his insights and memories, and gave advice that I felt was coming straight from the heart,” said Ksenia Richards, a second year MBA in the Winston-Salem Evening program. “I kept thinking that he had probably heard those types of questions before, but not a single time did he shy away from a question students asked or showed any impatience. Mr. Buffett seemed to enjoy himself during the conversation and the feeling was mutual. “

After the Q&A, it was time for lunch at Piccolo’s. Shah and some other students were invited to ride with Buffett. “He drove the car himself and gave us a quick tour of some important landmarks in Omaha. It was unbelievable! He asked each of us in the car where we grew up, what we do and where we see ourselves in the next 10 years,” Shah recounted. “He told us about his businesses, about his grandchildren and about his daughters while we were driving to the restaurant. At the restaurant too, he was down to earth and humble and answered our questions patiently.”

“Mr. Buffett was nothing like I expected, yet everything I expected at the same time. He was full of life and energy, and I never doubted that he was speaking from his heart. It was evident that he holds these events because he loves talking to students,” Kuyath said. “He emphasized that the giving of time was the most important kind of philanthropy, and that making a person feel like they are genuinely cared about is the greatest philanthropy of all.”

After two and a half hours with Warren Buffet, the Wake Forest students visited two Berkshire Hathaway subsidiaries, Oriental Trading Company and the Nebraska Furniture Market, both located in Omaha, Nebraska.

“Having read about the Nebraska Furniture Market in ‘The Snowball,’ I was impressed by the size of it in person.  Bob Batt, who is the founder’s grandson, spoke to us a lot about the values that drive their family business.  Their motto is ‘Sell Cheap and Tell the Truth,’” said Whitney Dawson, a first year MBA in the Winston-Salem Evening program. “ I was also very impressed with our trip to Oriental Trading Company.  The CEO, Sam Taylor, spent a great deal of time with us explaining their business model and how they stay competitive in the market.  The tour of their warehouse was very interesting.  They process 30,000-40,000 orders per day with a 99.96% accuracy rate.”

Several students agreed that their big takeaway was an idea Buffett expressed about philanthropy. They shared his view that building relationships with other people in order to have an impact on their lives was an important way to spend time – more important than amassing wealth for its own sake to “have a hospital wing named after you.”

“During our time with Warren Buffett and the other leaders, I had an ‘aha’ moment when I realized how much I’ve learned since starting my MBA,” said Tiffany Reynolds, a second year MBA student in the Winston-Salem Evening program.  “In speaking with these leaders, I felt that I truly understood the business strategies and concepts driving these successful organizations. It was a great feeling to recognize the tremendous growth I’ve experienced in such a short period of time.”