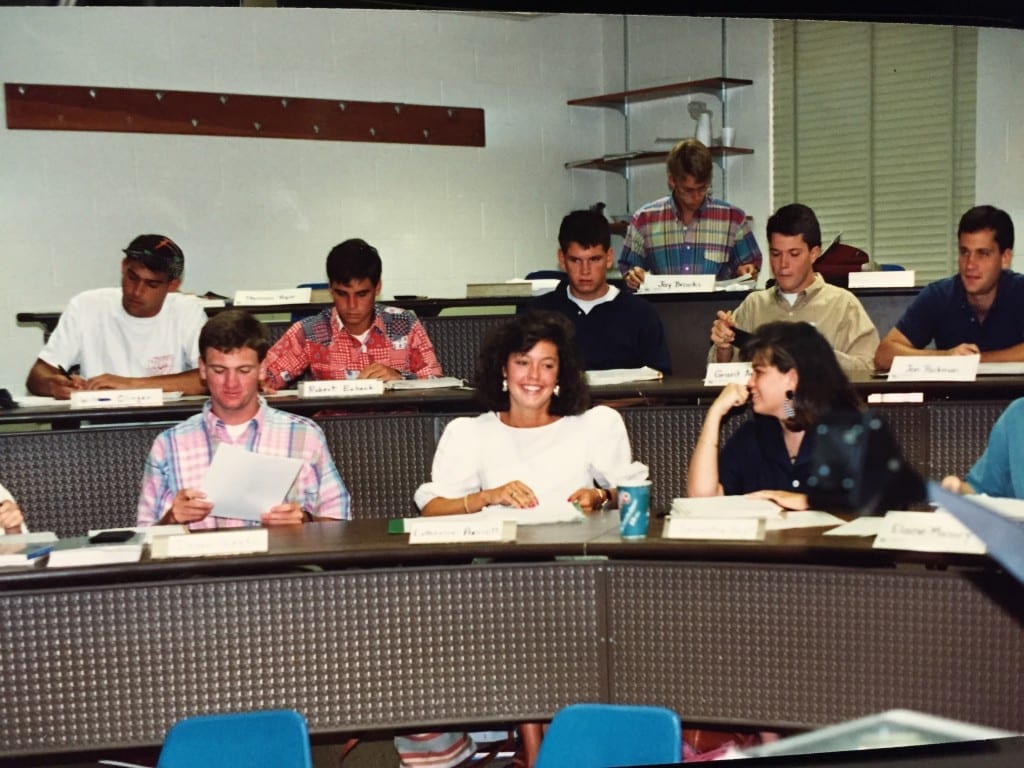 By Stephanie Skordas, School of Business

Something else big was going on – students who majored in the liberal arts started signing up for what was essentially the first business boot camp. “It was designed for students who did not want to major in business or accountancy,” said Ben King, director of the program and professor of practice at the School of Business. “It was as close as you could get to a business minor at Wake Forest back then. More importantly, we were the first University in the nation to provide this kind of condensed business education to liberal arts students.”

Fast forward 25 years, and the program has grown exponentially, from one section of about 20 students in that first class to two sections less than five years later, to the current three sections of about 110 students.

While students today are wearing Tory Burch flats, Lululemon yoga pants, and Vineyard Vines T-shirts, what hasn’t changed is how integrative the program is run, with classes building on each other in an intensive five weeks. King says the classes build upon each other, so that what students learn in accounting also helps them as they study ratios in finance.

The program not only teaches accounting, marketing, strategy and finance, but also business life skills, like communicating in business, managing up, and teamwork. Every day after class, students have two to three hours of team meetings to explore projects and other assignments.

“Collaborative learning and collaborative outcomes are new to most of our students, mainly because much of their education is about individual achievement,” King said. “It helps them gain an appreciation for a diversity of perspectives from different students. They need to understand what the marketplace looks like and how richer outcomes happen when you get more than one mind involved in the process.”

Over the years, the program has brought in guest speakers who live in the intersection of liberal arts and business. Two examples include L.A. Clippers point guard – and former Demon Deacon basketball star – Chris Paul, to talk about the intersection of business and athletics and “Father of the Bride” and “Buffy the Vampire Slayer” film producer Howard Rosenman, who offered his point of view about how business and entertainment connect.

“It’s a really great way to learn more about the business side of Wake Forest, and I thought it might give me the tools to make my dreams and plans a reality after I graduated,” said Mo Earley (’13), who credits the program for changing her career trajectory. A sociology major, Earley attended the program the summer before her senior year. During the program, Wake Forest alumni from Deloitte came to give a presentation on consulting, and their passion for their jobs in federal consulting awakened something in her.

“I realized that consulting is not this big scary business term, but rather a really great way people are applying business knowledge to help people. So it very much fit into this idea of Pro Humanitate for Wake Forest,” Earley explained in a video testimonial about her experience. So she applied, interviewed and received a job offer that November, before graduation. Now a human capital analyst at Deloitte in Washington, D.C., Earley recommends the program to other students, whole-heartedly.

“It’s one of our shining programs at Wake Forest,” King said. “We accomplish a lot in five weeks, and we touch a lot of lives in a very impactful way.”

“It’s a really good tool set to have because it teaches you to make your ideas come to fruition, in the real world,” Earley said. “Because business is everywhere, and you’re going to have to deal with different business terms and business experiences no matter what you do.”