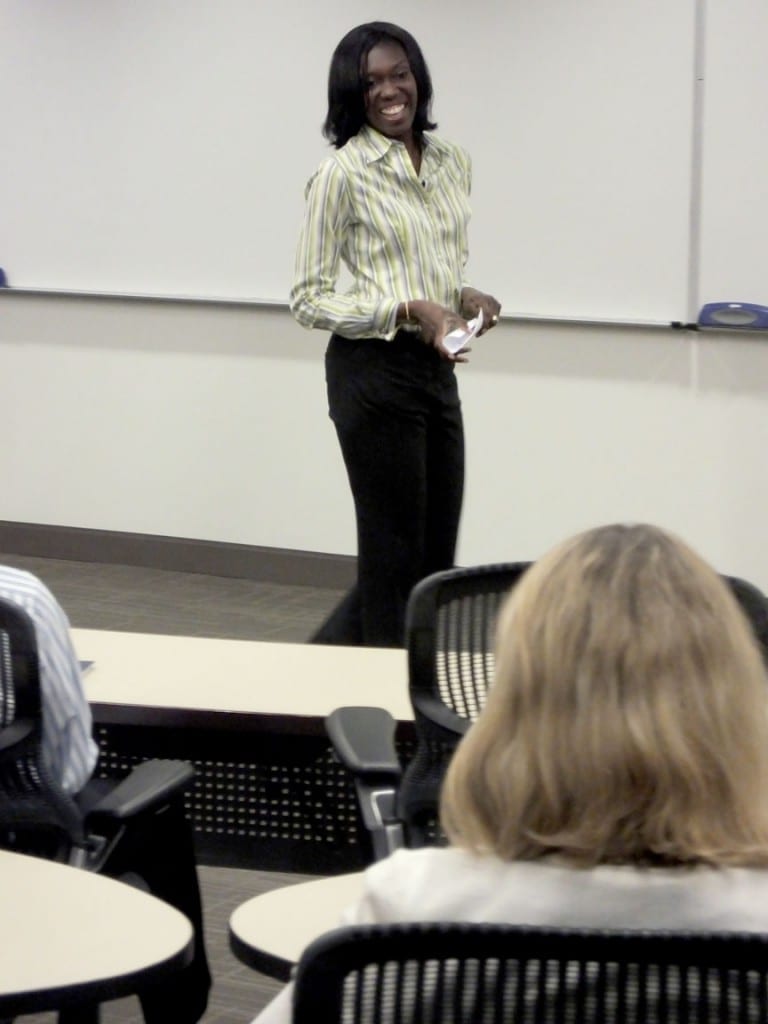 The Bank of America retail products and underwriting executive says people are likely to remember her because of her Nigerian accent (it’s lovely), her height (she’s tall), possibly her race (she’s black) and her unusual name. And as long as people are going to notice her, she wants it to be for the right reasons. So, she strives to have a distinct point of view.

She revealed the pride she takes in what makes her different to a group gathered for an Oct. 3 lunch and learn session at the Wake Forest Charlotte Center. Students, staff, faculty, alumni and local businesspeople came together to hear lessons from an executive who believes we should accentuate our differences.

That part of her talk stemmed from a question from the audience. Someone asked Cole if she felt her journey had been harder because she’s a black woman. “Not harder,” she responded. “Just different. But we’re all different in some way. Use your difference as an asset.”

Cole’s work responsibilities include developing business strategy for the bank’s payments business, the debit business and electronic and emerging payments product portfolio. Cole, who has a master’s in business administration from Northwestern University’s Kellogg Graduate School of Management, and her group serve the bank’s 40 million U.S. retail banking customers.

She has the heart of regional banker. Yet she says the only way to innovate in banking is to work for a big bank. And she wanted to be where the innovation was. She brings humanity to her job and says she never lets her team forget: “Behind every account is a person.”

“We exist to help make our customers’ financial lives better,” she says of Bank of America. And she works to communicate that to her team and the bank’s customers. “Customers need to know that we care,” she says. That’s the bottom line.

Other advice from Cole:

Much of what Cole said resonated with Sarah Wetenhall, a Bank of America commercial banker who’s also second year student in Wake’s evening MBA program. “I especially liked her message about standing out,” Wetenhall said. “I don’t blend in, and I’m glad to hear that’s good.”

Titi Cole’s audience at Wake Forest won’t soon forget her – and not because of her voice, height or name. It was her powerful message of standing apart from the crowd that engaged this lunchtime crowd.

Page Leggett is a freelance writer/editor/communications strategist in Charlotte, N.C., and a 1987 graduate of Wake Forest University.