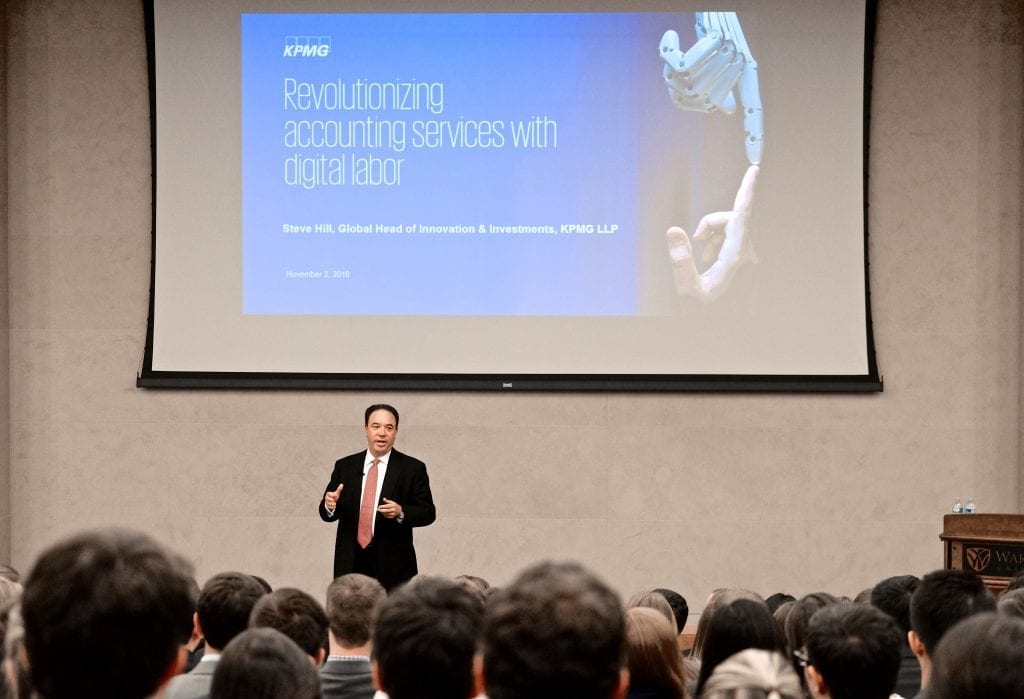 “The opportunities technology offers us can do exceptional good or exceptional damage,” Steve Hill, KPMG’s U.S. head of innovation and global head of innovation and investments, suggested at the beginning of the 2016 Hylton Lecture. As he looks to the future of accounting, and particularly audit services, Hill said he sees new ways for CPAs to leverage technology to gain important insights and advance the industry.

“Digital labor gathers intelligence, perceives its environment, learns and improves, reasons and infers outcomes, and understands context in natural language,” Hill told the audience. He gave the example of IBM’s Watson supercomputer, which has been trained by cancer doctors at Memorial Sloan Kettering to think like an oncologist. With that training, Watson can examine a patient’s symptoms against clinical studies, patient records, and medical textbooks to come up with a list of potential diseases, matched by risk.

Hill shared that KPMG has also partnered with IBM Watson to train the supercomputer on auditing skills. It is part of an exclusive partnership with IBM and other leading IT companies that he believes will revolutionize the industry.

“Cognitive technology will take your expertise and make you much more powerful,” Hill told the audience of Master of Science in Accountancy students, faculty and staff members. “It will make you smarter and much faster. You’ll be able to examine full data sets to gain insights you’ve never seen before, instead of just looking at data samples. But it won’t take the place of CPAs. Humans will always be needed to certify the findings.”

In Hill’s opinion, the human element will be needed to ensure the digital labor is coming up with the right answers. As physicians found the need for more specialized expertise as technology enhanced medicine, Hill expects CPAs to branch out in the same way.

“I felt that the applications he described would be easily adapted to tax,” said Andrew Taylor (MSA ‘16) who will be working in KPMG’s tax practice in New York after graduation in December. “A lot of time goes into comparing information or pulling information that could be easily done by bots. It’s like being in a futuristic sci-fi movie, but in real life.”

“I didn’t realize how advanced we are in using this technology and applying it to auditing and tax,” said Dayln Shelton (MSA ’16). “I thought that it may be something like five to ten years down the road, but hearing it’s as soon as two to three years away was really eye opening.”

Emily Burke (MSA ’17) said, “It’s really great to hear about innovation and technology in your career path. Technology can be an in-depth topic, but he offered advice targeted to us. It’s going to affect our careers and it’s something we need to pay attention to.”

The Hylton Lecture Series began in 1980, making this the 26th annual event. It was named for Delmar P. Hylton, who established Wake Forest’s accountancy program in 1949. He helped grow it into one of the top accounting programs in the nation.