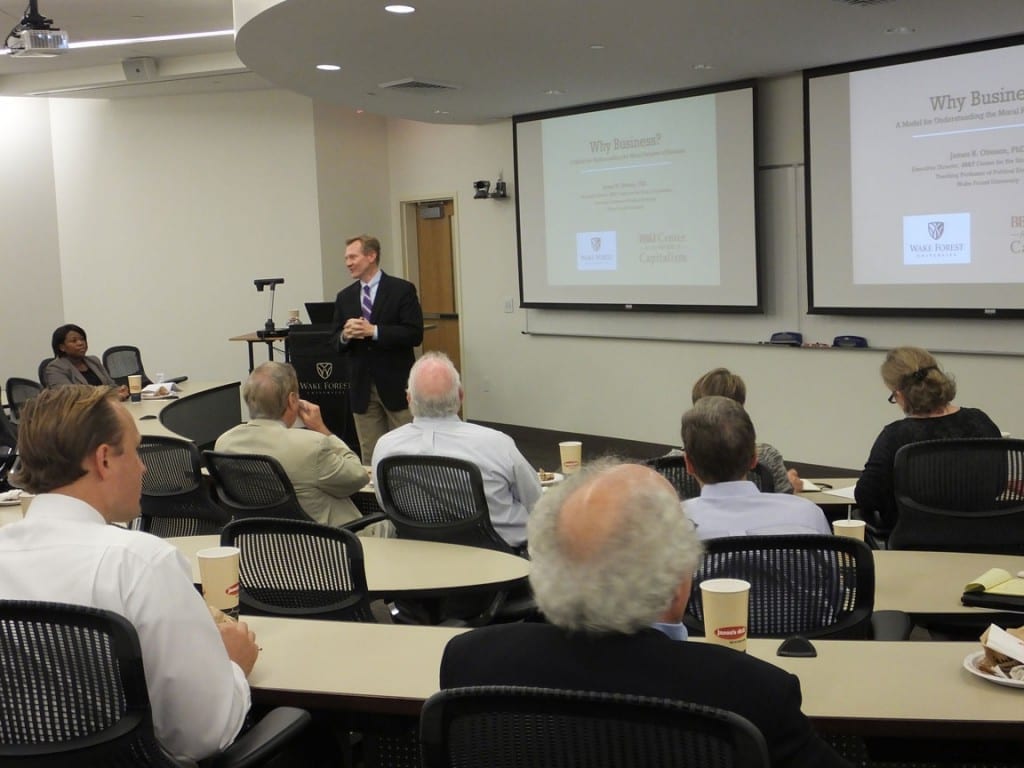 James Otteson, Ph.D. lives at the intersection of business and philosophy.

The professor, who joined the Wake Forest University faculty a year ago, believes it’s as important for business schools to instill the concept of honor in business as it is to teach accounting, marketing and finance. “We need to give students a moral framework,” he says. “When they’re faced with a dilemma in business, they need to be able to know what to do and what not to do.”

When the political economy professor and executive director of Wake’s BB&T Center for the Study of Capitalism spoke at a Sept. 11 lunch and learn session at the Wake Forest Charlotte Center, his intriguing topic was the role business plays in a humane and just society. Otteson says Wake Forest takes its motto – Pro humanitate – seriously. So, he feels a responsibility to give students, not just a superior business education, but a clear understanding of what it means to be “in the service of humankind.”

The professor says when he poses that question to new business students, their two primary responses are: To get a good job and to make money. Both are valid, he says.

But he suggests there ought to be an additional motivator: To serve humanity. He says, “No one asks a doctor, ‘What are you doing to give back to society?’” But that question is fair game for someone in business. Inherent in the question is a suspicion that businesses are doing something sketchy and that the people who staff those businesses should atone.

The philosopher in him is evident when he says, “No one says to the thief: ‘It’s OK to steal just as long as you do something good with the money.’”

Otteson wants to arm people with the principles they need to make moral and just decisions in business. His five core moral principles, which he calls inviolable, are:

The professor told the crowd that a properly functioning market economy includes honorable businesses. The concept of honor in business may not be discussed much, but it goes back to the 1800s. Until then, Otteson says there was just one way to get wealthy, and that was to take wealth from someone else – usually through military might. “That’s not how you create general prosperity,” he says.

In about 1800, the concept of mutually beneficial transactions took hold. The concept that both parties can benefit from a business transaction remains the hallmark of a humane business. “The most successful businesses in the world are the ones whose leaders ask every day, ‘How can I serve my customers better?’ They’re not the ones whose CEOs focus entirely on the quarterly earnings report.”

“The five core values Jim talked about are similar to the Hippocratic Oath doctors take,” she said.  “Serving humanity, which is at the core of Wake Forest’s mission, doesn’t have to be about self-sacrifice. You don’t have to sell all your belongings and live in a tent. You can be successful in business and have a life of meaning.”

And Jim Otteson is on a mission to ensure the business leaders of tomorrow know how to make money and give back.