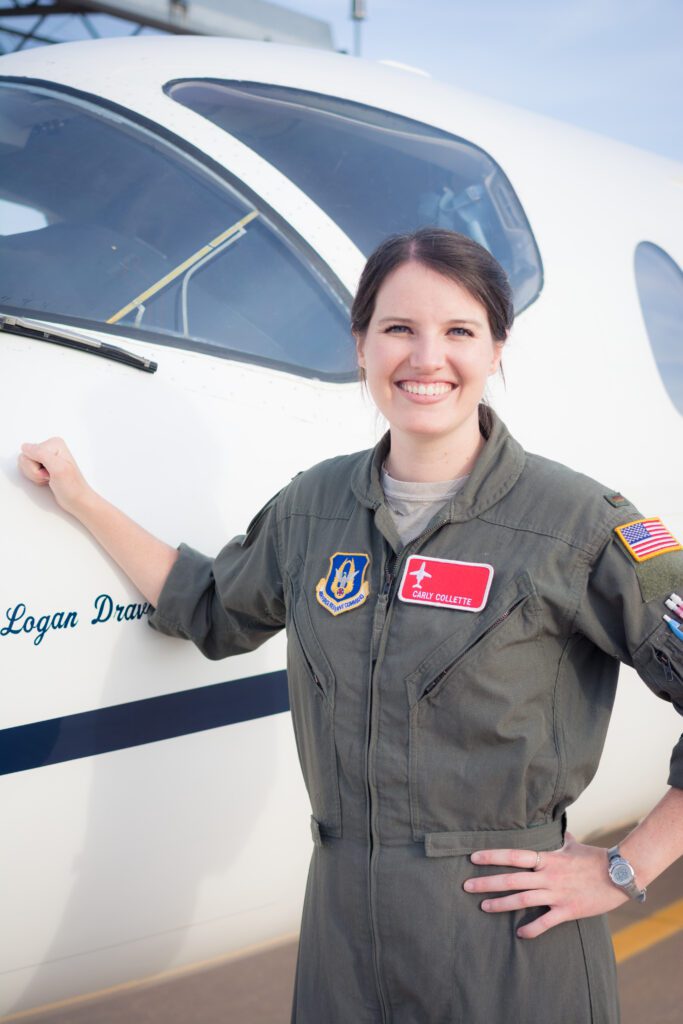 Stacy: We met five years ago in the admissions process, when you were a senior at UNC Chapel Hill and planning to pursue a career in accounting after completing our Masters in Accounting program. But you’re now in the Air Force. What happened?!

Carly: I come from a military pilot background: my dad was an Army (now commercial) pilot; my grandfather was a pilot in the Navy. I had considered a military career and even taken some ROTC classes in college but couldn’t find a way to blend it with accounting. After graduating from UNC, I took a flight lesson just to try it out and get a sneak peak of what my dad does for a living. I had been admitted to the MSA program at Wake Forest and had accepted a position in auditing with DHG in Raleigh. After the lesson, I was hooked! I knew that I needed to find a way to incorporate flying into my life.

After researching, I learned that through the Air Force Reserves, if accepted, I could have a civilian job. My plan was to work for DHG and do the Reserves as well. I applied while I was a student at Wake Forest and only told my two roommates in case it didn’t work out. The Seymour Johnson Air Force base in Goldsboro, NC, hired me, but I did not pass the medical board because my eyesight was too bad! Fortunately, the LASIK surgery was successful, and I started training six months later.

Stacy: Where are you in the process?

Stacy: What type of plane do you fly?

Carly: I fly the newest and most technologically advanced aerial refueler, the KC-46. The primary mission is refueling other aircraft in flight.

Stacy: Is it true that you were on the crew that flew the plane over the stadium at the UNC-Wake Forest football game last month?

Carly: Yes! It was a dream come true. This game was UNC’s Military Appreciation game, and it just so happened to be the Air Force’s turn to do the fly over. I credit my dad – he reached out to UNC to let them know that they had alumni at Seymour Johnson. There were three pilots and a boom operator in the plane – I was the jump pilot. I helped us navigate the low-level route we mapped out – down to the second – so that we would hit our check points on time and be “on target, on time”.

Stacy: How do you envision your career from here?

Carly: My next venture is to become an airline pilot like my dad while also continuing to fly for the Air Force in the Reserves.

Stacy: Do you use your accounting degree at all? Anything you learned at Wake Forest that you have carried with you?

Carly: When I first started with the Air Force, my side job was running the Squadron Booster Fund, which was in the red when I took over (it’s now in the black). I advised on the proper practice for buying things and keeping a paper trail to track the money. More than anything else, I took away from Wake Forest the role that relationships play and the impact they can have. Business is not just about the numbers, rather the people you meet. The professors at the School of Business cared about their students and invested in their success.

Stacy: Can you talk about being a woman in a male-dominated field?

Carly: I have had an exceptional experience with the Air Force. There are seven females (out of about 70) in my Squadron. In my pilot training, I was the only woman (out of 12). I have been very impressed with the Air Force environment; never have I felt excluded or negatively impacted because of my gender. I have also found amazing mentors in the senior female pilots I’ve been fortunate enough to work with.

Stacy: What advice would you give current students?

Carly: Find your passion, whatever it is, and go for it! Do whatever it takes to pursue that passion. I had my life planned out five years down the road (with a career in accounting) and couldn’t be happier that I made the change to flying.