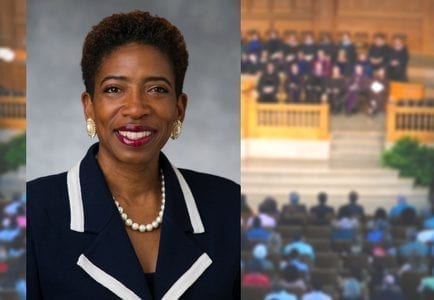 WINSTON-SALEM, N.C. – Carla Harris, vice chairman, managing director, and senior client advisor at Morgan Stanley will be the keynote speaker at the Wake Forest University School of Business Graduate Hooding Ceremony.  The event will be held in Wait Chapel on the University’s Reynolda Campus on May 20 at 11 a.m.

In her role at Morgan Stanley, Harris is responsible for increasing client connectivity to enhance revenue generation across the firm. During her 30-year career, Harris has had extensive industry experiences in the technology, media, retail, telecommunications, transportation, industrial and healthcare sectors. In 2013, she was appointed by President Barack Obama to chair the National Women’s Business Council.

Harris is the author of two books of business advice, Strategize to Win (2014), and Expect to Win (2009), and has also released three gospel CDs. She has performed five sold out concerts at Carnegie Hall, and serves as a motivational speaker. Learn more about Carla Harris at her website carlaspearls.com.