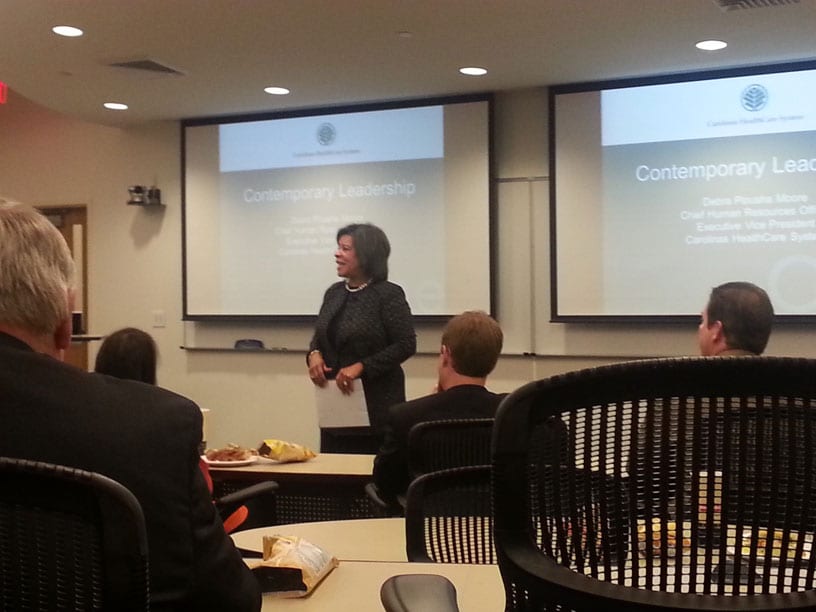 Debra Plousha Moore doesn’t say “staff” or “employee.” Instead, she describes “teams” and talks about including her “teammates.”

That’s one of the hallmarks of the contemporary leader – an organizational change-maker who cultivates followers and learns to harness their diverse talents and viewpoints to better their organization.

“Helping people surpass their limits – that helps you grow and you surpass your limits,” she says.

But she says her move to Charlotte and Carolinas HealthCare System truly has honed her idea of, and skills as, a contemporary leader.

She defines it this way: “A contemporary leader is a leader who uses personal influence to develop and inspire people to achieve organizational goals and make a difference in the community.”

That contrasts sharply with the characteristics of a traditional leader, she says. Previous leaders were those who could who could run the fastest, put in the most hours, worked the hardest, had the most FTEs and expected the biggest budgets.

She spent her early years as a leader in that world: “When we thought it was cool to send an email at 2 a.m.,” she says.

Now, she wouldn’t think of sending an email to a teammate earlier than 7 a.m. or later than 7 p.m. She’ll call someone on her team if it’s an emergency – but she’ll apologize and ask if that teammate will do her a favor and accept the call.

Because a contemporary leader doesn’t have to routinely disrupt a team’s off-hours time to get the job done.

Plousha Moore says she takes her cues from a handful of notable books, including “The Fifth Discipline: The Art & Practice of the Learning Organization” (1990) and “Influencer: The New Science of Leading Change” (2013).

First-year MBA candidate Michael Caple, who attended the Lunch & Learn, says he just got the audiobook edition of “Influencer” for his car rides.

“The topic of leadership is very important to me as a young professional,” he says, and he appreciates the new characteristics of good leaders both the book and Plousha Moore espouse: you’re only as good as the people around you and be sure to give back, both monetarily and individually, as a mentor or a coach.

During her talk, Plousha Moore highlighted some of the key takeaways from “Influencer”:

Leverage the team IQ – “You’re always, always smarter when you (listen to) the voice of the people around you,” she says. Solicit opinions from a wide range of people well before a project is due. It will cut down on the work – and the changes –at the end.

Understand balance – “I get asked how do you find work and home life balance. Really? I’ve had it all. But I can’t have it all at the same time with the same level of intensity,” she explains. She suggests setting personal priorities and then strategizing how to negotiate them with the organization.

Serve as public role model – First, understand that, as a leader, you are a public figure and that people will be interested in what you say and do. You have to be OK with that. Then, show others, through your generosity, that giving back is a priority. “You got here on somebody’s shoulders somewhere,” she says. “You need to be able to say, ‘This is what I took, and this is what I’ve given.”

Plousha Moore’s challenge for today’s and future leaders is to think differently, be relevant and adapt to change at different ages and stages of your career:

Mona Baset, a 2012 graduate of the MBA program and Director of Advertising and Brand Management for Carolinas Healthcare System, says one of Plousha Moore’s most important messages is that, as a contemporary leader, you need to ensure that your team understands the organization’s vision – project to project, and overall.

“It really does take more than once or twice” to communicate it, Baset says. “It takes revisiting it and making sure they continue to understand it and focus on that vision.”

Alicia Roberts is a freelance writer, editor and communicator, based in Charlotte, N.C.