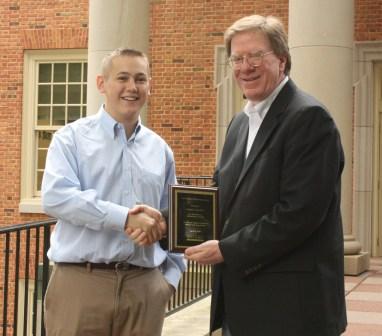 WINSTON-SALEM, NC – The BB&T Center for the Study of Capitalism at Wake Forest University Schools of Business is pleased to announce that Louis Brotherton, a senior Finance major from Seattle, Washington won the 2012 Essay Contest: “The Conscience of Business: What is the Role of Business Today?”

Students were challenged to write about issues raised during a “Capitalism with a Conscience” event at Wake Forest in January that featured Whole Foods Market co-CEO, Walter Robb.

Brotherton won a $1,500 prize for his essay that presents a logical argument as to how the system of capitalism enables, and in fact encourages, the simultaneous pursuit of both corporate and social goals. He argues that…

• Although there are instances of unethical conduct by individuals and occasionally by organizations, these are exceptions.

• The ethics of capitalism are predicated upon integrity and cooperation. Capitalism creates the incentive to cooperate, and the natural checks and balances of capitalism keep self-interest and ethical lapses in check.
Four other students received “honorable mentions” and $50 Whole Foods gift cards.

“Every year the BB&T Center for the Study of Capitalism offers the opportunity for Wake Forest students to weigh in on important questions about contemporary topics in our civil discourse,” said Professor Page West, Director of the BB&T Center for the Study of Capitalism. “This year’s contest attracted a large number of entries from students across various fields of study. Faculty from across the campus served as judges in a ‘blind review’ process where the judges have no information about the student. Congratulations to Louis and thank you to Whole Foods and the faculty judges for making this year’s contest such a success.”

For more information BB&T Center for the Study of Capitalism events may be found at (capitalism.wfu.edu).