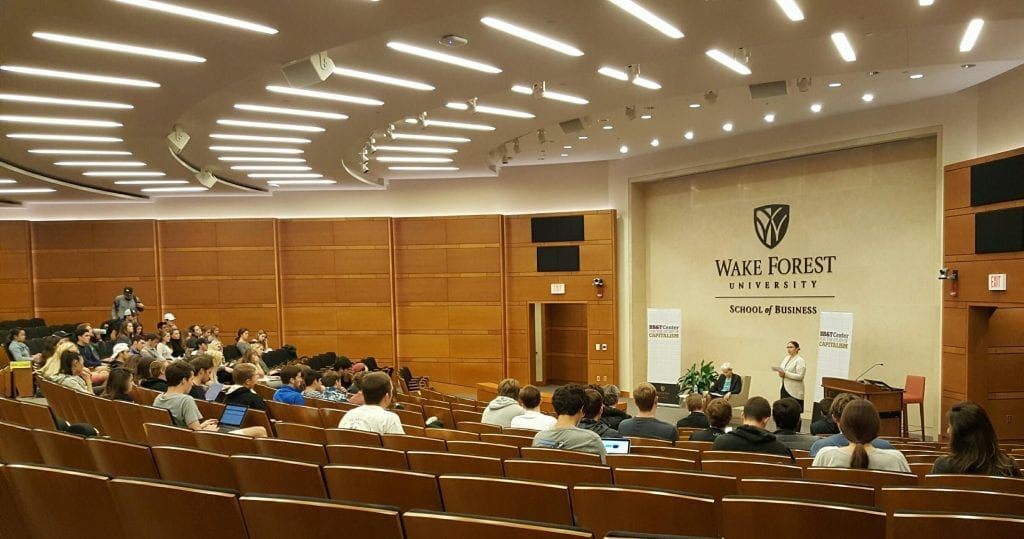 As any educator will tell you, defining something is the first step to understanding how it works.

In her recent BB&T Center for the Study of Capitalism lecture, guest speaker Elaine Sternberg set out to determine an essential definition of capitalism. About 50 students attended the talk, held Oct. 27 in Broyhill Auditorium, which included both a presentation of her paper “Defining Capitalism” and a question and answer session.

Since the inception of modern capitalism in the 15th century, economists and philosophers have argued about the merits and flaws of the economic system. Sternberg believes that both capitalism’s opponents and advocates have done a poor job of actually defining capitalism.

Sternberg highlights how the term ‘capitalism’ has long been used as an excuse for supposed evils. Specifically, critics have pointed to examples of alienation, exploitation, and poverty as the effect of a capitalist system.

As a result of these criticisms, Sternberg argues a true definition is needed.

According to Sternberg, true capitalism can be defined as “an economic system characterized by comprehensive private property, free-market pricing, and the absence of coercion.” Her definition attempts to set true capitalism apart from forms of political capitalism, including crony capitalism and welfare capitalism, which rely on coercive government action to operate successfully.

“I think Dr. Sternberg did an excellent job of calling on all of us to be very thoughtful in our choice of words,” said Ana Illtis, professor of philosophy and director for the Center for Bioethics, Health and Society. “If we all use the same term to refer to slightly or even radically different concepts, then we are not really engaging each other in a productive dialogue. Her insistence that we define the term ‘capitalism’ is one example of the need to be sure we know what we are talking about before we start critiquing it.”

In true capitalism, in other words, people only participate in programs and transactions of their choosing, and the government is directed at the protection of property rights rather than managing the market.

“Strictly speaking, a society with a government cannot be completely capitalist, insofar as government necessarily involves coercion and public property,” said Sternberg. “Until around the 1930s, the United States would have largely qualified.”

The event was co-sponsored by the BB&T Center for the Study of Capitalism and the WFU Philosophy Department Thomas Jack Lynch Fund.