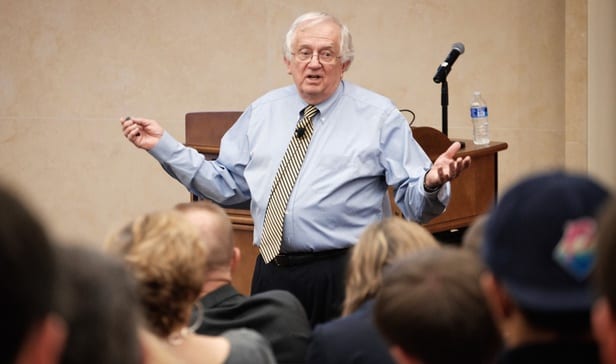 Accounting draws many students because of how neat and tidy it appears. Debits and credits must balance out. Industry standards provide extensive guidance on accounting for all sorts of transactions. That clarity can be comforting.

Jim Leisenring, who delivered the 2015 Hylton Lecture at the Wake Forest University School of Business March 24, was there to make students, and even faculty, a bit uncomfortable by shattering any illusions of clarity. That’s why he gives talks like this, he said.

“I question the inconsistencies and try to bring some potential solutions,” he said afterward.

Accounting is full of inconsistencies and ambiguity, he told more than 200 accounting graduate students, faculty and others in the Broyhill Auditorium. Accountants must understand those to better provide accurate, useful financial information.

He may also be, Senior Associate Dean for Accountancy Programs Jack Wilkerson said, the only person to deliver the Hylton lecture twice over its 35 year history.

“He is the consummate standard-setter on both the national and international levels,” Wilkerson said. “I’m not sure there’s another person who’s touched as many accounting standards, nationally and internationally, as he has.”

His roles at FASB and IASB also mean that, for the last several years, he’s been a primary participant in an ambitious effort to create a single set of global accounting standards. That effort was the subject of his lecture.

In a speech that wove contagious humor into his highly technical examples, Leisenring delivered his judgment on the outcome of that decade-long effort: “I won’t live long enough, I think, to see a single set of international standards.”

Some “spin doctors,” he says, are proclaiming the effort a success. He disagrees.

In many nations, success has been defined as the international standards being “allowed or used.” Success in the United States, he says, means the standards are required. After all, if they’re optional, are they really standards?

And, Leisenring says, progress on global financial accounting standards — even progress on clearing up ambiguous standards now used in the United States — will be slow.

“Saying that we [the accounting profession] move at a glacial pace is an insult to a good glacier,” he told the crowd. “Because they do move.” Although politics and different viewpoints have slowed down efforts at creating international standards, there are underlying problems that pre-date the 21st century’s interconnected, global financial markets.

“C’mon, those were issues we had in standards settings since the 1930s and 1940s,” he says. “Progress has been limited because of lack of agreement on basic conceptual issues.”

Students who attended the talk said they liked his perspective, which contrasted with the “there’s one right way to do it” approach they must often learn first in their accounting courses.

“It was interesting to hear that from someone who’s seasoned,” said Allek Surrat, a student in the Master of Science in Accounting (MSA) program who’s scheduled to graduate in December 2015. “It makes me more cognizant that the accounting profession isn’t perfect.”

Some students said they had already glimpsed some of the ambiguity that can characterize real-world accounting.

“I’ve seen that already, even from my internship,” said Miguel Garcia, also an MSA student. He recounted hearing partners debate the proper treatment of leases — a contentious issue in accounting standards — for a client. “It definitely shows that it’s not black and white in the real world.”

If some students come to accounting for its clarity, Leisenring doesn’t mean to turn them away by highlighting inconsistencies.

“My real goal is to hope that excites the brightest of them,” he said afterward, as students and faculty enjoyed a reception on the Reynolds American Terrace. “I want them to see there are some things there that might be challenging.”

Despite his personal views on some of the most contentious questions around leases, derivatives and other issues, Leisenring said there is no easy way to resolve the ambiguities and create truly global standards. “I don’t know how to make it better other than to try to keep appointing smart, dedicated people.”

The Hylton Lecture Series in Accountancy was established in 1980 to honor Delmer Paul Hylton, who started Wake Forest’s accountancy program in 1949 and helped build it into one of the top accounting programs in the nation.

Mark Tosczak has more than 20 years of professional communications, public relations and marketing experience. He is based in Alamance County, N.C.