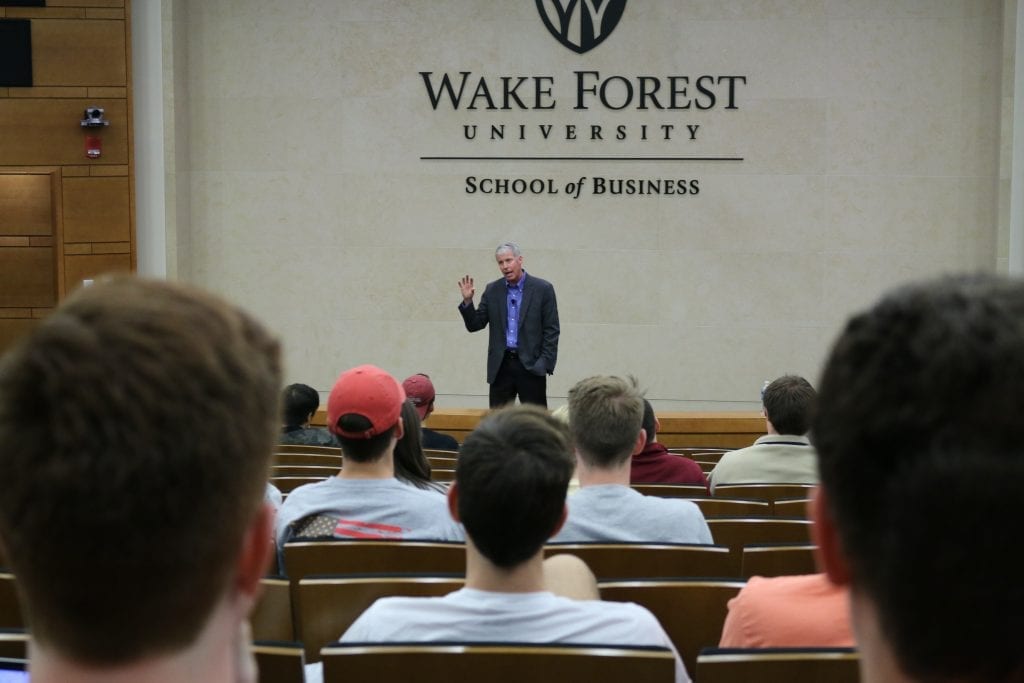 For Chris Wright, president and CEO of Liberty Resources and Liberty Oilfield Services, one simple philosophy keeps him moving forward as an entrepreneur: work with the right people.

Wright said he learned how to choose partners, colleagues, and vendors carefully through trial and error during his entrepreneurial career. He offered those life lessons to students, faculty, and staff in Broyhill Auditorium on October 25 in a talk sponsored by the Wake Forest University Eudaimonia Institute.

When it comes to incentives, Wright suggested that company policies like flexible vacation time allow his staff to arrange their schedules to achieve work objectives, but still care for family or personal needs. He said it’s important to find the incentives that motivate the behavior you’re seeking and noted that it isn’t always about money.

A love of science, technology, and energy led Wright into the oil and gas industry. He is actively involved in what he calls the shale revolution and gave the audience a brief overview. He credited that movement and other advancements in energy with lowering the price of oil in recent months. In his opinion, the primary beneficiaries of innovation in a market economy are always consumers.

“Oil last year, the total world oil, was a little over one trillion dollars cheaper than it was the year before,” he explained. “That’s about $150 for every man, woman, and child in the world. To me when the necessities of life — food, energy, and housing — become cheaper, standards of living rise.”

Wright also discussed some of the potential environmental risks involved with hydraulic fracturing, like increased seismic activity. He said the risk is real, but it can be substantially mitigated by doing the work the right way—which he insists on in all of his business activity.

Wright also discussed alternate energy forms in a question and answer session and suggested that he sees a brighter future for solar than wind power in the near future.