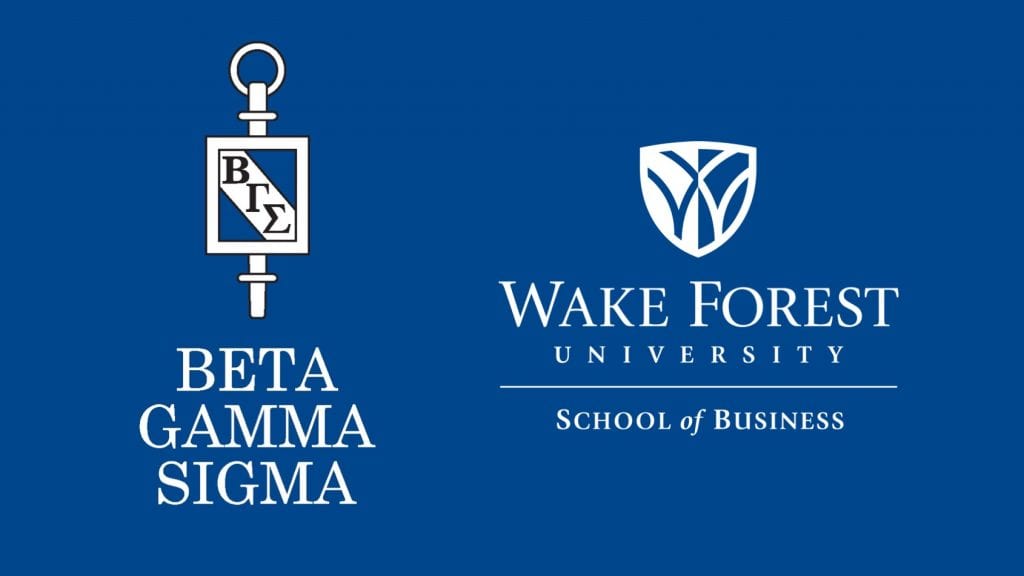 WINSTON-SALEM, NC – (April 11, 2017) Wake Forest University School of Business students who performed at the highest academic level in 2016-17 were inducted into the national Beta Gamma Sigma honor society on April 11 in a ceremony in Farrell Hall’s Broyhill Auditorium on campus.

Membership in Beta Gamma Sigma is the highest recognition a business student can receive in a business program accredited by the Association to Advance Collegiate Schools of Business (AACSB) International.

The Wake Forest University chapter of Beta Gamma Sigma dates to 1961 and is one of more than 540 campus chapters worldwide. Senior finance major David Oberkircher leads the chapter this year.

The following students earned initiation as ranking among the top 20 percent of graduate students in their class:

Beta Gamma Sigma has inducted more than 750,000 outstanding students into membership since its founding in 1913. Members currently reside in all 50 U.S. states and more than 160 countries around the world.


The Wake Forest University School of Business offers undergraduate programs in accounting, business and enterprise management, finance, and mathematical business. Our graduate programs include a Master of Arts in Management, Master of Science in Accountancy, Master of Science in Business Analytics, and a Master of Business Administration. Our programs are consistently ranked among the world’s best in surveys by U.S. News & World Report, Businessweek, the Economist, Forbes, and the Financial Times. Wake Forest accountancy graduates rank first for all test takers among large and medium-sized schools and have ranked in the top 2 among first-time test takers for 16 of the past 17 years.