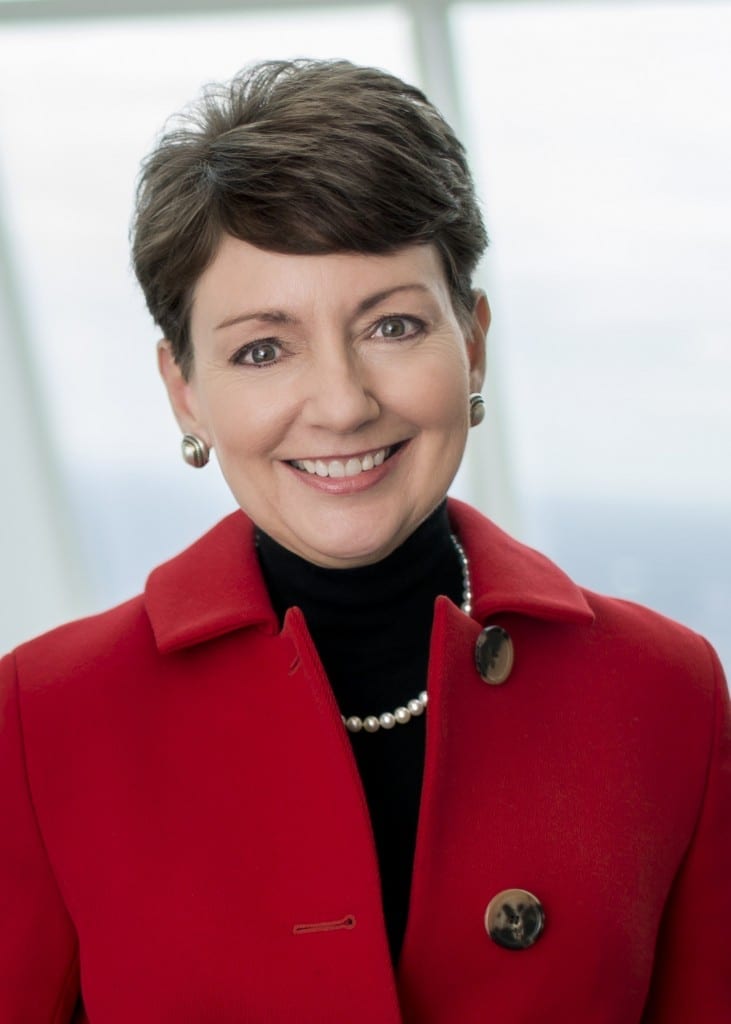 Depending on who you talked to – scientists, journalists, environmental activists or homeowners in Eden, N.C. – the coal ash spill at the Dan River this winter could be described as anything from accident to absolute disaster.

To Lynn Good, president and CEO of Charlotte-based Duke Energy Corp., it is an incident that continues to teach her lessons about leadership.

Good shared those experiences during the WFU Charlotte Center Speaker Series on June 4, addressing a sellout crowd who had many, many questions about how to manage an organization under such intense conditions.

“Leaders are always learning – you can guarantee that,” she said.

What she has learned from the Dan River accident was the importance of courage, clarity and purpose in a leader.

When a stormwater pipe below the retired coal-fired power plant on the Dan River burst in February 2014 and released 39,000 tons of coal ash into the waterway, Good said it created an engineering problem, a public relations problem and a legal problem.

And Duke Energy couldn’t wait for state regulators to determine what happened and who was at fault. Good had to mobilize her team to form a plan for addressing each facet of the problem immediately, so the organization could prepare for the ramifications.

Good said the situation immediately raised several questions from a leadership perspective: How do I define what it is to do the right thing? How do I set expectations? And how do I communicate those expectations?

“By industrial standards, the accident was small,” she said. “But it prompted a discussion and a conversation in North Carolina that was bigger than Dan River. Was it possible to store coal ash safely?”

That debate continues even today, but, at the time of the spill, setting expectations quickly and clearly empowered the organization at every level to solve the problem – from engineers in the field to c-suite executives. And it gave Duke Energy employees who weren’t involved in the cleanup to have confidence that the company was going to do the right thing – an important point as family, friends and neighbors asked about the situation.

Good said that, from her perspective, clarity of expectation can be more powerful than setting “vision” or “mission” in some situations.

Second-year MBA student Jason Handley, who introduced Good at the event, described her as forward thinking and collaborative.

“Lynn is the right leader at the right time for our industry, said Handley, who serves as director of smart grid technology and operations at Duke Energy. “Lynn listens with an open mind to very diverse opinions.”

The youngest daughter of Depression-era parents, Good said she grew up in a “no-excuses environment,” where the work was hard and the family was supportive – but whining was not tolerated.

Her first job out of college was at the accounting firm Arthur Andersen, where the motto was “Think straight. Talk straight.” She called it a “foundational experience.”

“It taught me the power of a team,” she said. “You didn’t do it by yourself. You did it with others.”

Then the Enron fraud was discovered and Arthur Andersen, the energy giant’s auditor, crumbled. Good said it set her on a decade-long path of disruption and chaos.

“I was on a detour from the time Enron filed for bankruptcy,” she said. “There was an incident called document shredding. The detour became clear on a call in March 2002, when I learned the firm was going to be indicted.”

The lesson here, she said, was to embrace the detour and be resilient.

She got up the next morning, began calling the other top accounting firms to ask for interviews. Six weeks later, she was a partner at Deloitte & Touche.

“There was not time for mourning,” she said. “You had to keep moving.”

Above all, Good said she has learned throughout her career that a leader can’t do everything – a good leader needs to delegate.

“The pace, the scope of how you use your time is probably the biggest challenge,” she said. “If there’s work to do, it is in the back of my mind all the time. Managing time is difficult when that’s who you are. … I strong recommend vacation.”

She cautions up-and-coming leaders to pay attention to the toll that the pace of leadership can take on you. She watches her sleep and what she eats, and even keeps a tally of how many days a week she exercises, because she performs better across the board if she leads a healthy lifestyle.

She also strives to keep the criticism – which she said can be “withering” – in perspective.

“As a leader, you need to project confidence and optimism,” she said. “There is not place for hanging your head and feeling sorry for yourself.”

Because, in the end, there’s always another detour or disruption to manage.

The opportunity to hear such perspectives on leadership is one of the main reasons Jacob Velky (MBA ’15) chose WFU Charlotte Center for his MBA.

“Part of a comprehensive MBA program is to get outside leadership perspectives,” he said.