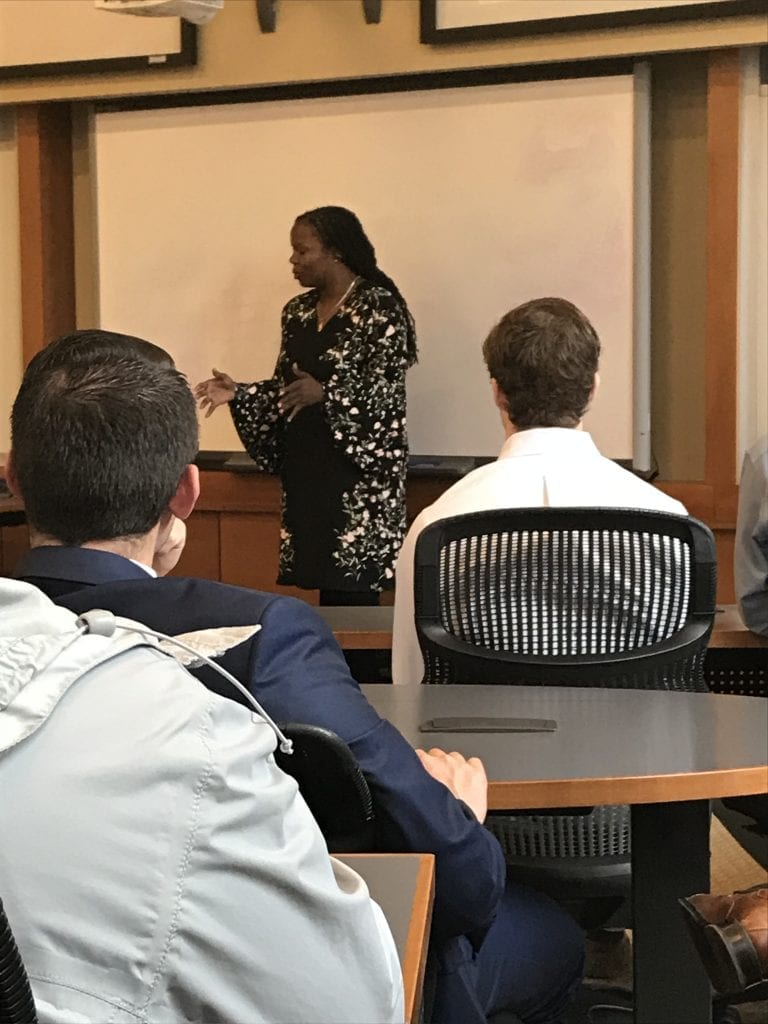 Authenticity, persistence, and perseverance. These were the guiding themes Atlanta Hawks CMO Melissa McGhie Proctor (’02) shared during a workshop she hosted at Wake Forest University School of Business on Tuesday, March 28. Proctor shared her career journey, beginning with her determination to become the first ball girl for the Miami Heat professional basketball team. Along the way she earned her communications degree from Wake Forest University and worked at Turner Broadcasting for more than a decade before becoming Executive Vice President and Chief Marketing Officer of the Atlanta Hawks and Phillips Arena.

“Everything happens for a reason,” she said. Growing up as an artist in high school in Miami, Proctor wasn’t very familiar with basketball but fell in love with the NBA after her cousin introduced her to the sport. The introduction launched a dream Proctor described as “wanting to become the first female coach in the NBA despite never having played basketball.”

In pursuit of this goal, Proctor wrote many letters to the Miami Heat seeking an opportunity to work with the team. “Eventually my persistence paid off,” Proctor said. When the Heat called her back, it was for an undefined position because, at the time, the team had only ball boys and wasn’t sure how to incorporate Proctor. Because of this, Proctor admits that she was slightly discouraged, but on her first day she learned so much and has been in love with basketball ever since. Ultimately, she became the Heat’s first ball girl, which the team renamed “team attendant.”

Proctor credits this opportunity to her ongoing persistence and finding ways to market her authentic self to the organization creatively. Her creativity stood out, and she served as an intern with the Miami Heat for six years up until she graduated from Wake Forest in 2002.

After graduation, Proctor began her professional career with Turner Broadcasting Systems in Atlanta, Georgia. Her first year in Atlanta, she also worked part-time as a ball girl with the Atlanta Hawks. During her time with Turner, Proctor served a variety of positions and built her brand along the way, earning many professional achievements and accolades.

A decade at Turner earned Proctor a solid reputation and invaluable connections and relationships, and there came a time when she was chosen to lead a health and wellness startup within the organization. When the company went in a different direction, Proctor and the entire business unit were laid off. She shared with the students in the audience that this time was a difficult period in her life, but Proctor persevered because she believes everything happens for a reason.

While unemployed, Proctor remained involved in the marketing industry and continued to network. During an event, she encountered a former colleague who had recently left Turner and for the Atlanta Hawks. One conversation led to another, and she was invited to consult with the Atlanta Hawks. Proctor consulted for a few months and was ultimately brought on as VP of Brand Strategy. Proctor said she relishes the irony of the situation because she knows she was in the right place at the right time.

To the students in attendance Proctor offered this advice:

“It was truly humbling to hear Ms. Proctor share the journey that led to her position as the Atlanta Hawks CMO,” said Elton Jonuzaj (MA ’18). “She is a perfect example of being authentically yourself and still proving to others the quality of your work. I believe this comes from her starting from the bottom which gave her the experience to understand what it means to be a great leader holistically.”