“Wake Forest was love at first sight for me,” Anil Rai Gupta (MBA ’92) told the audience at the Wake Forest University School of Business Graduate Hooding Ceremony on Sunday, May 14. “Everything was fresh and exciting: the campus, the exchange of ideas, and the curriculum.”

Gupta is chairman and managing director of Havells India, one of the fastest-growing electrical goods companies in India, which purchased the European lighting company Sylvania in 2007, an organization one and a half times larger than Havells.

Graduate students, parents, family, friends, faculty, and staff members assembled in Wait Chapel to welcome the alumnus back to the School.

“Exactly 25 years ago, I was seated where you are right now,” he said. Gupta described his feelings at his graduation as satisfaction at completing his degree, eagerness to begin practicing what he learned, and anxiety about starting on his new journey. In his keynote, he shared how Wake Forest shaped him as an individual, how market liberalism stokes growth, and how entrepreneurship is the key to a fulfilling life, especially in volatile times.

Gupta mentioned faculty members who had an impact on him, such as Ram Baliga, Chuck Kennedy, John Pinder, and Rick Harris. As a student from India where the culture places teachers or gurus, on a high pedestal, Gupta was used to showing great reverence to his professors. “Here, the professors insisted we address them by name,” he said. “Old habits die hard, and it took me a couple of months to fall in line.” He said the personal relationships between students and faculty taught him how open communication is essential for learning and relating to people – something that is critical for all businesses.


According to Forbes India, the relationships Havells has built with is dealer network are stronger than other players in this industry. One way Gupta and Havells build this relationship is by focusing on the benefits to its dealers. His perspective on this is inspired by a Caterpillar case study he studied here at Wake Forest. Havells invests a small percentage of the dealers’ profits in a mutual fund every year. Dealers can withdraw their money and the interest after three years, and many use it to fund their children’s educations.

“It’s interesting to observe recent global events that underline some reversal and tilt towards protectionism,” he said “Let me say that liberal market values benefit all stakeholders and we may be underestimating the perils of shutting ourselves out from the rest of the world. Protectionism gets in the way of efficient allocation of resources.”

Trained as an entrepreneur

“To my mind, an entrepreneur is not just somebody like [Facebook founder] Mark Zuckerberg or [Tesla founder] Elon Musk. Any employee who thinks of the organizations as his or her own and works for its betterment is an entrepreneur. It is a mindset, not just capital ownership,” he explained. Gupta shared his belief that his father, Havells’ founder, was a born entrepreneur while he considers himself an entrepreneur by training. “While it helps if you are born with traits of entrepreneurship, it’s not a pre-requisite for success.”

Our Wake Forest motto of Pro Humanitate has taken root in Gupta and flourished at Havells. Through the organization’s QRG Foundation, more than 50,000 schoolchildren in India receive safe and nutritious lunches in more than 650 schools. The program began more than ten years ago.

Gupta urged the audience to keep their family members close as they move through the business world, as a source of strength, to radiate success, and share victories. He offered these final thoughts: “You are not here to serve yourself alone, you have to contribute to society, and entrepreneurship is your very powerful tool for that.”

At the Wake Forest University Commencement on Monday, May 15, Gupta received an honorary degree, the Doctor of Laws. It is frequently given to honorees who are leaders in the business world. Wake Forest recognized Gupta for his thoughtful approach to business management, commitment to social responsibility and global citizenship, and his belief in values-driven leadership. 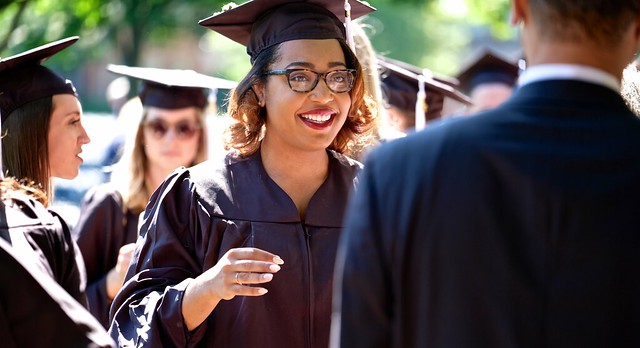 To help elevate awareness and understanding of the many different identities and experiences that are categorized under the Latinx umbrella, the #WFUSB will be featuring personal testimonies of our Hispanic, Latinx, and Latino-identified members throughout the month! (2/3)

Calling all #BizDeacs! 🚨🎩 The Deacs Day of Giving is LIVE! You can give a gift to the School of Business. Using the link below, you can support the School of Business Fund, Pre-Wall Street Career Track Fund, or any of our programs! #DeacsGive #WFUSB 🔗: bit.ly/3lqyThc pic.twitter.com/YjsDbKt73z

Students can submit questions for the Q&A by Friday, Sept. 17. through the link below👇 📊:wakeforest.qualtrics.com/jfe/…

#BizDeacs, join our live session to get to know Dean Michelle Roehm and participate in a Q&A session with her! Questions will be answered during a special Meet the Dean virtual session for students on Thursday, Sept. 23! #WFUSB #DeanRoehm pic.twitter.com/eF1zKIe4YT

Join us for our first Face to Face Speaker Forum featuring Malcolm Gladwell author of "Outliers" and "Blink"! The event is sponsored by the #WFUSB Allegacy Center for Leadership and Character. All proceeds will support need-based scholarships. For more: bit.ly/3sTASOv pic.twitter.com/PJABwBTyyt

Join us for our first Face to Face Speaker Forum featuring Malcolm Gladwell author of "Outliers" and "Blink"! The event is sponsored by the #WFUSB Allegacy Center for Leadership and Character. All proceeds will support need-based scholarships. For more: bit.ly/3sTASOv pic.twitter.com/8MpkXBnqdz

@PresidentWente recently visited our Charlotte Center to share words of wisdom and to hear from our Wake MBA students about their academic journey! Thank you for the inspiring visit, Dr. Wente! #BizDeacs #CLTMBA #ProHumanitate Full story here 📰: bit.ly/3BMXm70

Check out the new decoration in the Founders Living Room to encourage our #BizDeacs to continue protecting our Wake Forest community! #MaskUp #KeepingOurCommunitySafe pic.twitter.com/jJmYzf0J4R